Skip to primary content
Now this might seem like a strange title to most people but these are the two things which got me through my 50 mile ultra-marathon challenge in the Lake District last weekend! When entries opened for the Lakeland 50 event last September I was reminded by my friend Simon to enter quickly. It was a good job I did as entries sold out within a couple of days.
The months passed by and then suddenly July is here! In the meantime I had decided to move house and inevitably this turned out to be last Thursday, the day before I was due to head up to Coniston to register for the event. Together with a really busy couple of weeks at work this didn’t add up to the best preparation! I made the final decision that I was going at lunchtime on Friday, heading up at 8pm to avoid the legendary northbound M6 traffic on a Friday afternoon. Unfortunately this meant that the campsite was closed when I arrived at 1am and I spent a rather uncomfortable night in the car, probably managing 2-3 hours’ sleep. Simon had a similar experience and ended up parked in the same car park in the centre of Coniston. Registration opened at 7am and we duly presented ourselves for the obligatory kit check, weigh-in and issuing of map and road book. Soon after we were on a coach to the start at Dalemain near Penrith, wondering what we had let ourselves in for. The Lakeland 50 is an ‘ultra-tour of the Lake District’ starting with a four mile loop around Dalemain before following a sweeping route which takes in Ullswater, Haweswater, Elterwater and finally Windermere, finishing in Coniston. Over the 50 mile course there is around 3,500m of climb across the various mountains.
Lakeland 50 event website

11:30am soon came and we were off – 587 runners all heading on the same loop around the Dalemain estate with 50 miles to go. The first few hours were hot and humid making for less than pleasant running conditions, albeit with beautiful long-distance views across the Lake District in the clear air and sunshine. The initial excitement at the start soon wore off and the pace gradually slowed as the reality of what was ahead dawned on people. The course was split into sections with six checkpoints along the way in various locations. All had an array of tempting and necessary food and drink on offer together with electrolyte drink, gels and other essentials. I arrived at the first checkpoint at Howtown after a couple of hours and was pleased to see Simon hadn’t left by the time I got there. I was feeling a little pain in my left knee and was grateful for some painkillers which I knew he had stashed in his pack. We had agreed that we wouldn’t run together, running our own races to see how we were feeling with the pace and distance in the heat. By the second checkpoint at Mardale I was feeling quite dehydrated and drank two bottles of electrolyte before filling up my water bottle again. This was a good move as it was still extremely hot and immediately after the checkpoint is a big climb which was hard going. I was also starting to feel ‘on the edge’ of cramp in my legs. This, I have learnt, is about electrolyte and sodium balance as you need to replace that lost through sweat. Craving salt I proceeded to have a tomato soup with three salt sachets in it – lovely, followed by a coke with salt in it – not as bad as it sounds! This became a regular routine and by the time I reached checkpoint 4 at Ambleside I was experimenting with two salt sachets in a cup of coffee! Somehow my experimentation worked and although I had struggled with the first twenty miles I felt stronger for the last thirty. Ambleside was crowded with people lining the streets and in the pubs. It’s a great feeling being cheered on by spectators who don’t even know you, just know what you are attempting. I did comment to a fellow runner that I am glad I’m not famous though as I imagine it could get a little wearing being recognised, congratulated and cheered on ALL THE TIME! Soon after Ambleside the weather had turned and persistent rain had started to fall. This would remain the case for the rest of my run. It was starting to get dark as I came to the fifth checkpoint at Chapel Stile. From a way back I could see the twinkling fairy lights and glowing fire buckets leading the way into the relative comfort of the checkpoint. Together with some comfy sofas and hot food this was looking like a welcome break. As I took my food to a table who did I see? Simon! I had caught up with him at last. ‘What are you doing here? I thought your knee had given up’ he said, surprised to see me. ‘I’m’ off he said, eager to finish ahead of me despite his ITB playing up and meaning that he was struggling badly with the descents. With that he bolted with some parting banter about whether I would catch him he disappeared into the gathering darkness. Forty down, ten miles to go! Headtorch on and map in hand it was time to concentrate and make sure not to make any silly navigational errors – so easy to do when you’re tired, even easier in the dark and rain. Rather than my first thought of hunting him down and whizzing past him I decided to take the sensible option and slowly jogged the last few miles in with a group, some of whom had run the event before. With the rain still falling and some quite tricky navigation on the last leg this proved to be a good idea. Soon the long twisty descent into Coniston appeared and the last few miles were done. I crossed the finish line in 13 hours 21 minutes at around 1am.

In summary, great event, great support, great aid stations. Truly a classic and I can see why it sells out in 24 hours every year. Will I be back to do the 100 mile course one day? Probably! 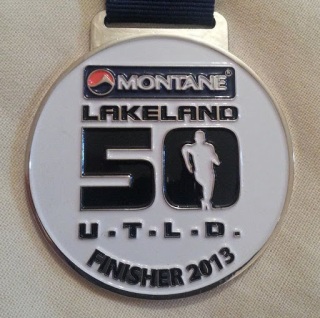